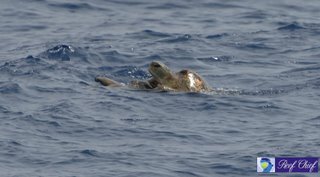 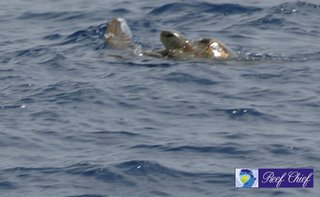 I hope that these photos aren't censored by local authorities... wait till you see the video!

Green Turtles Chelonia mydas
The green turtles are a large turtle with average weight about 120 kg, and reach up to 100 cm long from the head to tail. The green turtles are herbivorous and spend the majority of their lives foraging on shallow seagrass beds. They normally nest in sandy beaches on the offshore island or in some of the remote areas on the main land. They lay about 100 eggs every four years; they might also lay more than ones during the breeding season and about 14 days in between.


Hawksbill Eretmochelys imbricata
Hawksbill turtles almost half the size of the green turtles, it weigh 40 kg only and reach up to 70 cm in long. The hawksbill are considered as an endangered species according to the IUCN, the Red Sea known as one of the most important breeding area for this endangered species. Hawksbills inhabit coral reefs where they feed primarily on sponges. These habitat assemblages are widely distributed throughout the Red Sea. In the Red Sea, hawksbills tend to nest diffusely on isolated; remote beaches were they lay about 80 eggs every two years. They are known to make shorter migrations than other species, and may thus in the Red Sea remain closer to their natal beaches. Hawksbills are lighter, and leave a much ‘shallower’ track on the sandy beaches, also they tend to nest close to vegetation and pits might not be visible.

Popular posts from this blog

Brief on Marine Scientist Abdullah Alsuhaibany Environmental scientist with a master of science in Marine Environmental Protection, University of North Wales -----presently working for the Regional Organization for the Conservation of the Environment of the Red Sea and Gulf of Aden (PERSGA) Also the official environmental scientist and member of Reef Chief Environmental Organization - (NGO) He joined our expedition between may 13th and May 16th. Yesterday or so -- he boarded the Golden shadow. Many thanks to Abdulla for sharing his knowledge and experience with our Reef Chief Mission.. He sends this message to his son and daughter: “hi Omran and Lein. I miss you all and I will see you soon. Say hi to your mom.” Abdulla
Read more

Look what the wind blew at the desert??

Yesterday, Reef Chief and Golden Shadow (Living Oceans Foundation) rendezvoused by Sasso Island at 0900H. We were pleased to meet Capt. Phil - the Program Coordinator and Principal Investigator and Dr. Annlise - Project Science Leader and also Principal Investigator who took us on a special tour on their amazing state of the art expedition vessel with 40 officers, scientists and crew. Take my word for it the Capt. Ian Sabet is not sleep at the wheel. for more info -- you can check their website at www.livingoceansfoundation.org and follow the red sea expedition.
Read more